What do I mean by “Party Games”?

When I was very young, my favourite party games were Musical Chairs, Pin the Tail on the Donkey, and What’s the Time Mr Wolf?

Those are not the sort of games I mean.

When I was a teenager, the games played at the parties I was (occasionally) invited to usually involved spinning a bottle, telling a truth, or doing a dare. I also once witnessed a drinking game which involved rugby players (naturally) wedging toilet paper into their buttocks, setting fire to it, then downing a pint of beer before being allowed to put it out.

Those are definitely not the sort of games I mean.

What I think of as a party game, though, is any game you might play after the meal at a dinner party, with people who aren’t really gamers: Pictionary, Perudu, Jenga, Balderdash – these were the games that my friends and I used to get out, back in the 90s, after the empty dessert bowls had been taken away. These were all games where the most important aspect was that people talked while they were playing, and laughed, and had fun.

So, in this chapter, I am going to tell you about my favourite games from recent years that fulfil that role. I don’t go to dinner parties as much as I used to, but I still love to play party games. Sometimes they come out at the end of a board game night, after we have been playing a heavier game, and want to wind down. Other times, they just come out because friends or family have popped round, and we want to have some fun.

Let’s start with Dixit shall we? Dixit is a card game. Most of the games in this chapter are card games, as it happens, but Dixit is one that feels least like a card game, because there is so much to look at. Each turn, one player (the ‘storyteller’) secretly selects a card from his hand, with a picture on it, and gives a vague clue as to what it is he is looking at (such as “Mmmm that looks delicious” or “I don’t think we are in Kansas anymore”). The other players then pick a card from their hands that they think could also match the clue, and then everyone tries to guess which one was the original card.  The clue has to be vague, because the storyteller only scores points if some of the others guess the correct card, not if all of them guess it.  The cards are all different, but they all have a dream-like quality to them that makes them interesting to look at, and this gives the game an interesting dimension.  Literally everybody I have ever played Dixit with, has had a good time doing it.

Another game that always goes down well at our place is Cockroach Poker, in which the object is, to pass onto your opponents as many cards featuring various types of vermin as possible. It has one of the simplest mechanics imaginable – play a card face down, then (maybe) lie about what it is. There are a couple of other rules to the game that make it even more fun, but basically, players who are unable to lie convincingly and/or identify when opponents are lying, will find themselves attracting more cockroaches, flies, and rats, than a medieval poo festival.

Cockroach Poker is one of the simplest of many party games in which the object is to tell lies, and spot when other people are lying. A more sophisticated take on the same idea is Sheriff of Nottingham, which has medieval tradesmen trying to smuggle goods and contraband past the titular lawman, to become the apple king, or the cheese queen. This is a very popular gateway game, and rightly so, as it looks great and is hilarious to play, with the right group of people.

There is a genre of game, though, that takes the idea of lying and bluffing a step further, allocating all players a secret role that they have to play, without the other players guessing what that role is. Some of my favourites include:

Another game that includes hidden roles, and bare-faced lying, is Millions of Dollars. This game is not just about the lie itself though, it is really about negotiating. You are a gang of criminals, dividing the loot, after a successful heist. Will you share the money, or will you pay the other players to drop out? Some mental agility is needed to work out how much a share is actually worth for you, and for your accomplices. Can you trick them into dropping out, or get them to pay over the odds for you to drop out? I have only played this game a few times, and it usually features quite a lot of pleading, complaining, and shouting, but in a good way.

H M S Dolores has a similar theme to Millions of Dollars, in that it is about dividing the spoils of a crime. This game is more laid back though, with quiet negotiation, and each turn has a tense will-they-betray-each-other-or-not moment?  They usually do.

If deceit, crime, and backstabbing all seems a bit much for you though, how about a nice word game? One of the most popular games of recent years is Codenames. For a game that consists merely of words printed on cards (although there is a variation with pictures instead of words), it has received an awful lot of love, and an awful lot of awards. Codenames plays with two teams, taking it in turns to try to steer their teammates towards one or more particular cards, from a grid of them that are on display, just by saying one word.

Another recent word game, which is, as it happens, my favourite, is Decrypto. This also plays with two teams, this time trying to pass cryptic messages among themselves, and trying to intercept the other team’s messages at the same time. My first experience of this game came about in a pub in Cheltenham, when I had to temporarily abandon a conversation with friends, because the group of students at the table next to us were playing Decrypto, and they were laughing so loudly that we could not hear our own conversation. I have played Decrypto myself since then, and I can confirm that it is funny. Just to manage your expectations, though, I should also mention that the students were all very drunk that night, and that later on they laughed even more loudly when one of them mispronounced the word “scone”.

Speaking of pubs, there is a game that, if you watch it being played from a distance, appears to be played with beer-mats. That game is Skull and Roses (or, confusingly, sometimes just Skull). It is, really, just another card game, but the cards are round, and made of cardboard, and you could definitely use them to prevent the creation of unsightly rings on wooden surfaces, if you wanted to. You wouldn’t want to, though – you would want to play the game instead. It is a simple but effective bluffing game, that borrows the best bits from poker and liar dice, as players outbid each other on how many cards they can turn over without revealing a skull. And, as if the beer-mats and skulls weren’t enough, the game’s publishers try to up the manliness quotient even further, by telling us, in the rules booklet, that this game was invented and popularised by biker gangs. Now, I have never been in a biker gang myself, and cannot confirm that that is true; so if any former Hell’s Angels are reading this, and can let me know the truth one way or the other, I would love to hear from you.

At the other end of the macho spectrum, is the card game Love Letter, which is perhaps the most famous example of the “microgame” genre. Microgames (I am trying to start a trend of calling them μgames, but as yet this has not caught on) are so called because they are small, quick, and easy to play. Love Letter has just fifteen cards; it comes in a pretty little cloth bag, along with a few wooden cubes. The object of the game is to get your love letter to the princess, avoiding the guards and the other castle inhabitants. It is a fun game, with some interesting strategies. If the theme sounds a little uninspiring to you, though, there are plenty of reskins available – that is, the same game but with a different theme. So, if your rugby player friends are coming over, having a night off from setting fire to their own bottoms, they would surely prefer a different version –  Star Wars, Batman, Lovecraft, … er … Letter to Santa Claus … actually, on second thoughts, maybe choose a different game. Or invite different friends?

I have to end this chapter with a caveat, and confess that there are undoubtedly hundreds of other great party games that I have not mentioned, simply because I have not played them. Some of the most popular games that I have never had a chance to experience for myself, include Monikers, Ca$h ‘n Guns, When I Dream, Funemployed, Snake Oil, and Time’s Up.

Forgive me. There is only so much partying one man can do!

Before we move on to the next chapter, though, I do want to mention one of my favourite ever party games, Telestrations.  If I say it is Chinese Whispers with pictures, then I am sure you will understand immediately how it works.  To end this chapter then, here is a Telestration we made earlier. I swear on my life that my mother-in-law drew picture number seven, and that she had no idea why we were all laughing. 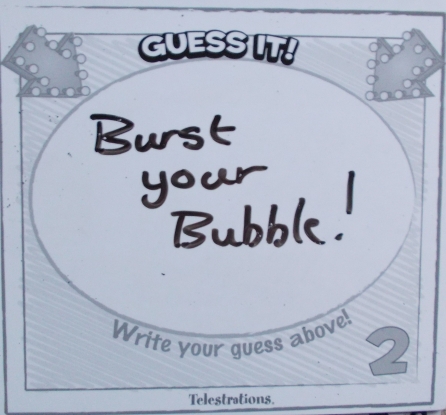 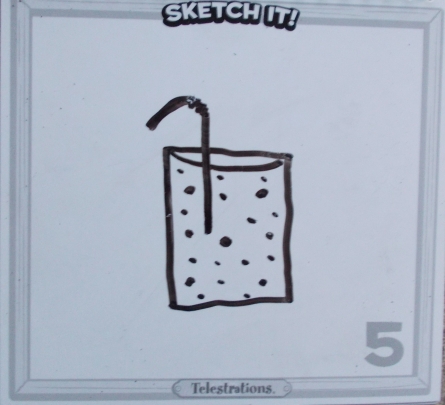 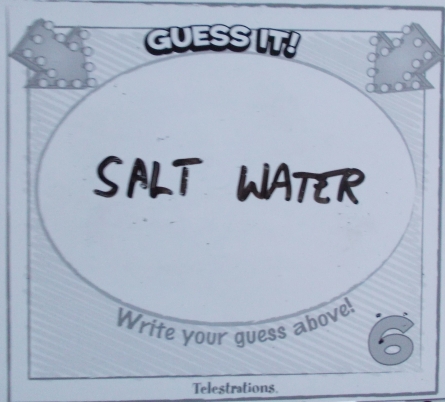 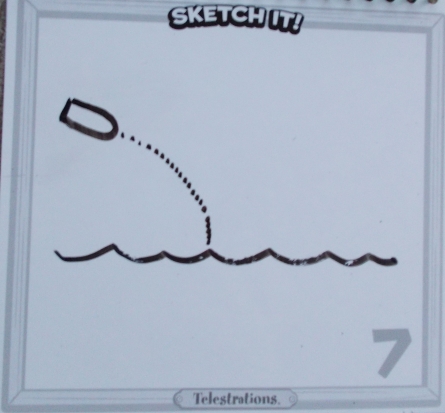