Welcome to my strategy guide for the game Hive®, designed by John Yianni. 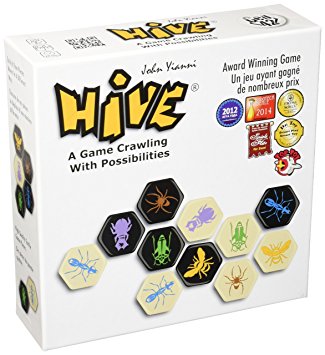 The Queen Bee must be placed in one of the first four turns, and until a player’s Queen Bee has been placed, that player may not move any pieces. It is generally preferable to place the Queen Bee before being forced to do so on the fourth turn.

A common opening is to play a spider first, then the Queen Bee in the second move, followed by an Ant, in a ^ shape, as shown below. 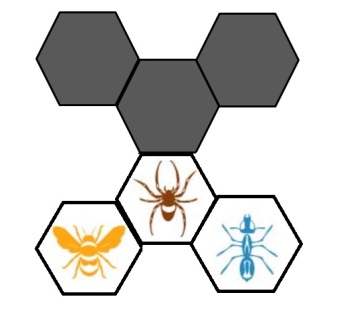 It can also be effective to play a ladybird or a grasshopper as your first move, rather than a spider, as that piece has the ability to jump out of its surroundings, which might be useful later in the game.

It is usually a good idea to pin your opponent’s Queen Bee early in the game, because it is very difficult to surround a piece that can move around.

In the diagram below, White has just moved his Ant to pin Black’s Queen Bee. 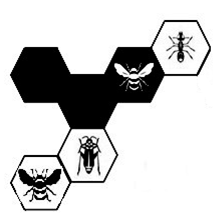 An alternative to pinning is “blocking” an opponent’s piece.  This means surrounding it, or partially surrounding it, so that it cannot slide out, and cannot move without breaking the Freedom to Move Rule.  Grasshoppers, Beetles and Ladybugs cannot be blocked.

“Circling” is a variation on blocking.

Creating an incomplete circle next to a Queen makes it more difficult for your opponent to surround it, because your opponents’ ants and spiders cannot slide into one of the spaces, as illustrated below: 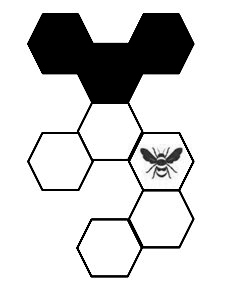 Pieces should not just be placed randomly. You should always select the right piece and the right place to put it.

It is usually a good idea to bring Ants into play early in the game.  You will want to use them to pin your opponent’s pieces; try not to let them get pinned themselves though.

Also, if you are planning to use them, Beetles are often best brought in early as it takes time to move them and if you leave it too late they might never reach their destination.

It is not usually a good idea to play Grasshoppers early, as their movement is limited at the beginning of the game, and their special ability of being able to jump into tight spaces is more likely to be useful later in the game.

Here are some things to think about when placing your pieces:

Which Pieces to Move

Ants and Mosquitos are generally considered to be the most powerful attacking pieces, though Beetles can also be very effective if used properly.

The Pill Bug is the most powerful defensive piece.

Grasshoppers have a useful ability to hop in and out of tight spaces, as do Ladybugs (very useful towards the end of the game).

The Spider however, is usually regarded as being the weakest piece because its move is so limited.

Early in the game, when the hive is small, the Spider’s limitations do not affect its performance so much.  For this reason, many players recommend playing a Spider early on and using it to pin the opponent’s Queen Bee, Ant, or Beetle.

When to Attack and When to Defend

It is very common for a game of Hive® to become a race to see who can surround the opponent’s Queen Bee first.

It is important to know when the race is one you are going to win, or lose.  In most games, if you are behind, you will not be able to catch up.  In these circumstances you must abandon the attack and defend instead.

At the beginning of the game the player who goes first is ahead, so he should attack to make the most of his advantage.

If you and your opponent are both beginners, or even if you are both intermediate players, the best way for you to win is simply to make fewer mistakes than your opponent.

If you have ever played chess, you will know that most games between novices tend to be decided not by who plays the best opening, or the best long term strategy, but by who accidentally places their Queen in the path of an opponent’s bishop.   It is the same with Hive®.  You can have a great strategy in mind, but if you make an elementary blunder, you are likely to lose the game quickly.

You should always strive therefore, to be the player who makes no elementary mistakes.  The following is a list of the most common mistakes that you should try to avoid.  Some have been mentioned before but I have put them all here together to form a useful reference:

Placing the Ant as an Opening Move

Don’t do it. The Ant is a powerful piece and it will be blocked in.

Delaying Placing the Queen Until the Fourth Move
If you do this you will find yourself in an unfavourable position. Your opponent will be able make an effective pin, and dictate where you can and cannot place your Queen Bee.

Not Getting Enough Powerful Pieces in Play

Make sure you get some Ants out early to attack or defend with.

Not Trapping Opponent’s Queen Bee before trying to surround it

If you start to surround a Queen Bee and it moves away, you will have wasted a lot of time and resources.

Pinning a Weak Piece with a More Powerful One

Do not pin, say, a Spider with an Ant unless you have to. Otherwise you fill find yourself out-gunned later in the game.

Be careful not to pin your own pieces. If you place a piece that pins one of your more powerful pieces, even if you plan to move it next turn, your opponent could pin the new piece and he will have double-pinned you.

When you position a piece, be careful that you are not completing a connection somewhere that allows a previously pinned piece to move.  This is especially important with the Queen Bee.

Forgetting About the Last Move

A piece which is pinning another piece cannot usually be moved for fear of freeing that piece.  However, it is often overlooked that the pinning piece can be used to make the game winning final move, as it does not matter about freeing an opponent’s piece then.

Your opponent could pin them, and if he does you will have helped him to surround your own Queen Bee. Sometimes it is acceptable to place pieces there that can jump or climb out later, but try to avoid placing Spiders or Ants there.

They move exactly three spaces so work out where you ultimately want it to go, and count back three spaces.  Always double-check it.

Moving a piece for no reason or placing a piece that has no value is a waste of a turn. As Hive® is usually a very tight race, this could cost you the game.

Not Attacking when the Time is Right

If you miss the opportunity to attack you will not win.

Not Defending the Queen

If you know you are behind and your opponent attacks, you must defend.

Do not become complacent when you are far ahead, because a decent opponent can often force a stalemate.  Even if he has no chance of winning himself, he can get a draw by defending his queen, and pinning and blocking your pieces in such a way that you can never complete the victory.

This page has been an extract from ‘Hive: the boardless board game’ by Steve Dee. It has included chapter 2 (Basic Strategy) and chapter 3 (Mistakes to Avoid). Other chapters include The Count, The Opening, Beetlemania, and Advanced Tactics. 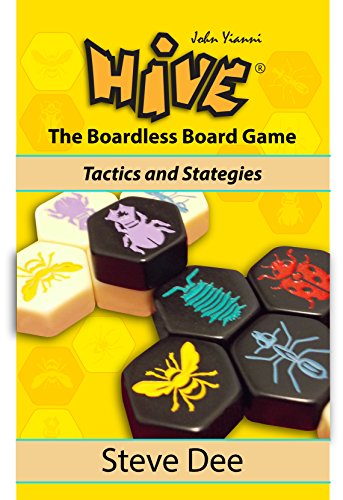