Welcome to my strategy guide for Donald X. Vaccarino’s second most famous game.

Before we start, I have a complaint.

Whenever I play a board game,  I always play green. It’s my favourite colour, and I get confused if I am not green. In Kingdom Builder there is no option to be green.  Booo!

Oh, what am I saying? I love you Kingdom Builder – you are my favourite “lunchtime group” game (i.e. one that takes less than an hour to play). You are clever, good-looking, and fun – like a great date.

I forgive you for not having a green player. I can’t stay mad at you for long.

Early in the game you should aim to have settlements in a few different areas of the board. This will give you more choices each turn, and give you the best opportunities to score from multiple Kingdom Builder cards.

To achieve this, you should try to play your first turn (and usually the second turn too) in such a way that you are adjacent to as few different terrain types as possible. This means that you are more likely to be able to play your second (or third) turn in a different part of the board.

It is usually not practical to be adjacent to no other terrain types at all at the end of your first turn, so think ahead, and choose your adjacent terrain type carefully. If you are unlucky enough to draw a card next turn that you have to play adjacently, make sure you played in such a way that there is something good nearby (a castle, a terrain tile, or a good scoring opportunity) as a consolation.

The first few moves are probably the most important in the game. Pay attention to divisions – mountains and water. Depending on the Kingdom Builder cards in play, you might want to choose areas where you will not be hemmed in. On the other hand, you might want to get hemmed in, as it means you will have freedom to go wherever you want to on the board next turn.

Once the game is underway, you should aim to score as many points as possible in all four scoring channels (i.e. the three Kingdom Builder cards and the castles). Do not neglect any of them – any player who decides to ignore, say, one of the cards, in order to focus on the other two, is likely to be beaten by someone who is fully aware of all three cards at all times. I know this is a tricky thing to do for a beginner, but it soon comes with practice. I have seen other strategy guides that claim some Kingdom Builder cards are better than others, and that you should not pay too much attention to the weaker ones. But I strongly disagree with that. Fishermen, Miners, and Workers are often considered weak, for some reason, but I usually find I can score a similar number of points from these Kingdom Builder cards as I can from any of the others. The game is well balanced, and has been thoroughly play-tested – I do not believe that any of the cards are objectively better than any of the others. You must do well in all of them. And don’t forget about castles, either.

The next important thing to do, is to get as many of the location tiles as you can.
There are two different types of special move:

It is very important to get as many of the first type as you can, and to use them every turn. Building extra settlements will get more gold for you, and it also means that you will run out of settlements earlier, ending the game. This means opponents will have fewer turns than they would otherwise have.

There are two location tiles, however, that I will always try to get, every time they come up. Sometimes I will even play a substandard first or second move, just to get them. If I miss out on them (perhaps because I draw the wrong terrain cards, or even just because I am the 4th player, and the others take them first) then I know it is going to be very difficult for me to win. The tiles I am referring to are the Paddock and the Harbour. 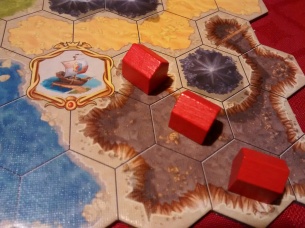 Using the Paddock:
Moving a settlement two hexes away is an incredibly powerful thing to be able to do. It is the best way of breaking the “must play adjacent” rule. Here are some ways paddocks can be used:

Using the Harbour:
Other than the Paddock, Harbours are the only way of crossing water. Here are tips on using them:

Some tips on getting more points from individual Kingdom Builder cards:

Note that connecting two distinct pairs of locations scores you more gold than connecting three locations in a line, even though it is usually no more difficult to do so.

Consider blocking a location off, so that opponents cannot get to it. You should bear in mind, though, that doing so might lose you a few gold too (because your settlements might score better elsewhere) but if the location is already partially surrounded by mountains or water, it might be worthwhile. Especially if it is a castle or has an unclaimed location tile, or if an opponent has already played a few settlements spreading out towards it.

The most important thing to do is collect as many “extra settlement” location tiles as possible, so that at the end of the game you have more settlements on the board than your opponents. Also, avoid winning one sector by a large margin, or you will suffer in the other sectors. On the other hand, it is extremely difficult to “win” all four sectors, and if you try to do that you might not end up winning any of them. If you score more points than your opponents, you have done well.

This is my least favourite objective card. It seems as though it is a really high scoring card, but I have played many games with it where everyone spent ages analysing how best to play it, only for the gold to be shared out equally at the end. Don’t tell anyone, but I usually leave this in the box when randomly selecting the three Kingdom Builder cards at the beginning of a game.

Choose the horizontal line that will also score you gold from another card, such as Fishermen or Citizens.

It is not as easy to do well on this  card as you might think, because there is often competition for the best lines, and opponents will block you, accidentally or deliberately.

Make sure you block opponents too – it is usually easy to see which lines they are going for.

This is similar to Knights, but easier to achieve (which is why it only scores one point per settlement) because the settlements do not have to all be on the same vertical line.

The ability to score well from this card is one that comes with practice. Once you have mastered it, you should be aiming to score maximum points each game, by getting all twenty rows.

The location tiles that allow you to move settlements to new areas are invaluable in a Hermits game, especially the Paddock.

If these are not available though, the other thing you can do is try to place your settlements in areas that are (or soon will be) cut off from the rest of the board, by water, mountains, or other players’ settlements.

When Farmers is in play, you should aim to have, by the end of the game, exactly the same number of settlements in all four sectors, or as close to that as it is possible to get.

You might also want to get as many extra settlements as you can, too. Note, however, that only one in every four of these will actually score you gold.

Be very careful not to find yourself completely locked out of one sector, or you will score no gold at all. Try to play settlements in all four sectors early in the game; one tactic is to start off near the centre of the board, or at least near to a border, so that you can more easily spread out into other sectors.

In terms of gold per settlement, this is the lowest scoring card in the game. It seems to reward unimaginative play – that is, it rewards players who just place all their settlements together in one big urban sprawl.

At the beginning of the game, play close attention to position of mountains and rivers – you will not want to get hemmed in. The Harbour location tile is especially useful when Citizens is in play, as you can connect to areas separated by rivers.

The way to play with this card depends very much on what other Kingdom Builder cards come up – there can be some interesting dynamics (e.g. if Hermits also comes up).

If you find yourself with two distinct settlement areas, it is usually worth trying to join them up, but remember to try to do so in such a way that you score gold from other cards too.

As with many cards, the trick with these is to score gold from more than one card at the same time.

In a Workers game, the castles should be a priority, because they are worth four points instead of three.

Also, the idea of surrounding a castle or a location tile to stop opponents getting it becomes a far more viable tactic, as it scores you points to do that.

Finally, people often ask me, “what is a good score?”

The answer depends very much on the location tiles and the Kingdom Builder cards in play. If they all complement each other well, I will be looking to score about 70 points. However, if the tiles and cards are difficult ones, the winning score in a multiplayer game could be in the forties or fifties. Also, you should be aware that two player games are usually higher scoring than three or four player games.

That’s about all I have to say about strategy for Kingdom Builder.

Thanks for reading.
Steve.