Welcome to my strategy guide for the board game ‘Carcassonne’, designed by Klaus-Jürgen Wrede. 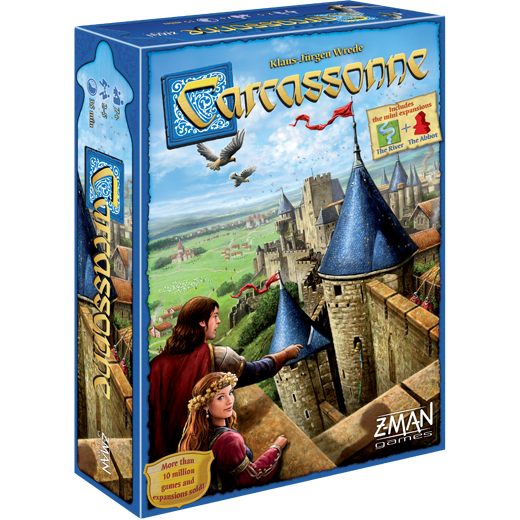 There is a certain amount of luck in Carcassonne, because the tiles you draw each turn are random.  However, tactics and strategy do play a huge part.  Just like with many other well-known games which also have a random element, such as poker or Scrabble, the better player is more likely to win, and luck rarely plays a deciding role.

When choosing an overall strategy, think about tile efficiency.  That is, how will you best score more points per tile than your opponents.

You need to get the balance right between scoring points quickly (i.e. constructing and claiming roads, cities and monasteries) and storing them up for the end of the game (i.e. fields).  Both strategies are important, and if you just focus on one or the other you are unlikely to win. I would suggest you need to focus at least a quarter of your effort and resources on securing and developing your fields.  In some highly tactical games it might be considerably more.

Make sure you do not play all of your meeples too early.  If you run out you will not be able to take advantage if the opportunity arises for easy points.  On the other hand, if you do not use them enough, you will have missed out on opportunities earlier in the game.  As a rule of thumb, I like to have deployed around four or five of my meeples by the midpoint of the game, leaving me with two or three in reserve (though of course a number of the deployed meeples will return to me over the next few turns as constructions are completed).  By the end-game (say, the last five tiles per player) I am usually down to one or two meeples in reserve.  It is usually good (or at least it feels good) to play your final meeple on your final turn.

You should employ different tactics depending on the number of players.

You should also play different strategies depending on whether you are winning or losing.

An easy way to score a few points is to claim and complete in the same turn a small city or road, and take back the meeple straight away.

Except for monasteries, try to claim features which are on the edge of the playing area rather than in the middle, as it is harder to complete constructions when you must match with other surrounding tiles.

Try to claim features that you think you will be able to complete quickly: roads with one end already in place, cities with few open sides, and monasteries with locations which are already partially surrounded.  That way you will be able to recall your meeple at short notice if needed.

Whenever you play a tile, try to place it so that it works towards more than one of your objectives.  For example, if you claim a road that runs past your monastery, then when you place a road tile you are scoring points for both the road and the monastery.

If possible, try to sabotage an opponent’s plans by playing a tile that makes it difficult (or even impossible) for them to finish a construction. For example, playing a road tile that leads towards an opponent’s incomplete city could mean that he needs a tile with both a city and a road on it, and there are not many of those in the game.

There are some expert players who have memorised all the tiles in the game, and can at any point work out the likelihood of a particular tile coming up.  Such a player can use the probabilities to make choices that maximise his chances of winning.  The diagram below shows (using a hopefully obvious notation) the distribution of the tiles so that you can do that if you want to, or you could just learn a few of the more useful ones, like the number of monasteries with roads (2).

Now here are some tips for playing specific types of tile.

Finally, let us consider the endgame – the last five or six turns.  When you enter the endgame you must adjust your thinking away from long-term plans and towards short-term gain and maximising your advantage in the turns that remain.  Here are some tips:

This page has been an extract from the book ‘Ticket to Carcassonne’, by Steve Dee.

Ticket to Carcassonne is an introduction to the hobby of modern board gaming, and an entertaining history of its origins. It is full of interviews, recommendations, and strategy guides.

Ticket to Carcassonne is available to buy at Amazon, in paperback or eBook form.